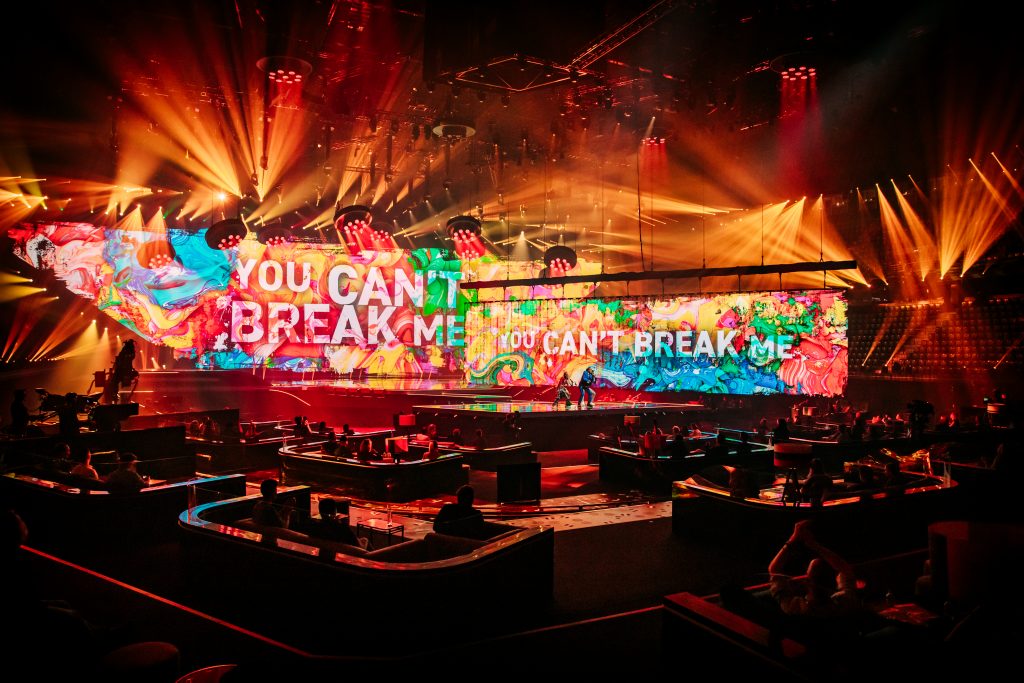 Leek, The Netherlands (June 14, 2021) – The Eurovision Song Contest (ESC) is considered one of the world’s most prestigious live television events. Being involved in this spectacle is an honor that many companies want to be credited with. Organizing the ESC in the Netherlands has given many Dutch-based companies that unique chance. ROE Visual is proud to be involved.

Later on, the final bids were discussed; products were screened and evaluated in the technical ESC team, consisting of Hans Cromheecke, ESC’s Head of Video Department, and Erwin Rintjema, ESC’s Head of Production. The ROE Visual products made it through the final selection. Having been used on many ESC editions before, both the ROE Visual products and the technical support they offer have an excellent track record.

When the ESC selected Faber Audiovisuals, they had a clear vision of which products would fit into the creative concept that lighting designer Henk-Jan van Beek and set designer Florian Wieder had presented earlier. Fortunately, when canceling the 2020 event due to the Corona crisis, it proved possible to transfer the initial creative vision to the design for ESC2021.

The feedback on the performance of the Black Quartz has been very satisfying.

Steve Ackein, responsible for video on behalf of Faber Audiovisuals, comments: „We’re impressed with the fact that we could build this 4mm LED screen in true rock & roll style, very fast and very accurate. The LED modules very precise mechanically, resulting in a beautiful, even, and flawless LED canvas.

Virtually no lines or gaps were visible between the panels or the modules. The few positions that needed a touch-up, there where the screen split into two huge moving doors, were quickly remedied with the edge-correction feature“.

„Another great feature about the ROE Visual LED panels is that there are no color differences between the LED modules; the color consistency is perfect,“ states Ackein.

As Hans Cromheecke, ESC’s Head of Video Department, continues: „This was a show that was different in many ways. The crew had to deal with social distancing and testing, and finally seeing the audience again was strange but great“.

„Throughout the build, rehearsals, and show, we had a very positive experience working with the HELIOS LED processing and the Black Quartz LED panels. The large color gamut and the unmatched black level of the Black Quartz make it very versatile to work with. The ability to dim the LED panels to very low brightness without losing quality in the visuals was stunning. We could lower the brightness to a mere 5 % without any problem, really a top LED screen to work with“, continues Cromheecke.

The whole video system ran on four 4K HELIOS processors and three eV4 processors. An OMNIS monitoring system kept the entire system in check, including the backup processors and 23 C24 smart PSUs. Technical Director for ROE Visual Victor Kortekaas and Steve Ackein and Ben Augenbroe, both responsible for video on behalf of Faber Audiovisuals, kept close contact to guarantee the systems ran smoothly. For a live broadcast show on this scale, you leave nothing to chance.

Working with the HELIOS LED processor was a first for me, but this state-of-the-art LED processing platform gave a very reliable and stable performance throughout the show. It’s effortless and initiative to operate, and we had the security of guaranteed redundancy without losing any capacity. We could not have wished for more“, comments Cromheecke.

„As a pioneer user of ROE Visual LED products, I can only add that ROE Visual products are the top LED screens in the AV world to work with,“ concludes Cromheecke.

During the semi-finals on May 18 and 20 and the Grand final on May 22, the ROE Visual LED panels could be seen in action both on stage and above the stage.