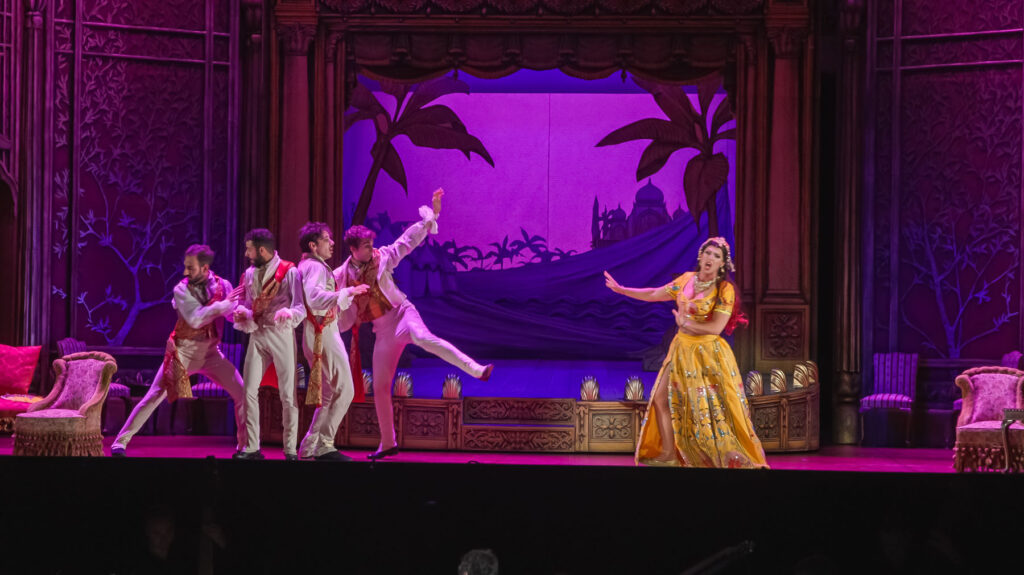 Astera Titan Tubes provided a great solution for the lighting of a rolling ‘small stage’ scenic truck which was central to the action for the 2022 Bayreuth Baroque Opera Festival’s acclaimed production of “Allessandro Nell’Indie” by Leonardo Vinci, directed by Max Emmanuel Cancic and lit by David Debrinay from Paris and Lyon, France, based design studio, LJOMA.

David is well acquainted with Astera products, and he initially asked lighting specialist Kai Fischer, the Festival’stechnical production manager who co-ordinates all the lighting procurement, if he could source Astera AX1s or Titan Tubes for the task of lighting the small stage – which played an integral role in the narrative.

The story is focused on Alexander the Great’s Indian campaign and his defeat of King Poros in 326 BCE at the Battle of Hydaspes, and in true Baroque style, a sense of spectacle and elaborate staging and complex detailed architecture was central to the production.

“I knew using the wireless Astera fixtures was the only way to easily bring light, colour and vibrance to the stage taking up such a small amount of space,” he commented, adding that he also chose this option because they had a short time in which to build the set. “It was a solution that enabled the stage to be built without needing to define in advance where I might need electrical power.”

Three Titans were attached above the back of the small stage set, with two in the front and one in the middle all clamped to the set roof, with another vertical unit on the stage left and right sides on their foot stands. They provided set washing and support key lighting when the actors were on it.

“We needed a neat and handy solution to fit into very tight spaces, and being wireless was essential, both because the stage moves up and downstage throughout the show and to deal with the fast scene changes that take place on it,” explained Kai.

Six different scenes within the main show were played out on the small stage, so when the set changed, the Titans were simply un-clipped and then re-clipped into their new positions to illuminate the new / current scenery elements.

Kai also noted that the Titan Tubes were extremely quick to move and he was impressed with the battery charge which lasted for two shows … and some!

It is the first time he had seen them in action on an opera show, but has used various Astera products on several TV productions and events over the last three years.

“Titan Tubes are the best innovation that we could have on this show!” Kai enthused, adding that as well as a great solution for opera and theatre shows generally, the quality of light output and high CRI make them ideal for key lighting and for being squeezed into otherwise inaccessible positions.

He notes that having Titan Tubes as set dressing in this context was extremely expedient on crew power, with all the onstage set lighting changes throughout the four-hour show handled by one person.

David has been advocating Astera for many years and has used different luminaires on a diverse selection of international shows and performances … including a recent fashion event in New York where no less than 200 Asteras were integral to his design.

The Astera tech on this production was Frank Brösa who is based in Berlin. He usually works on TV productions and architectural lighting projects but was delighted to be part of the talented team delivering the 2022 Bayreuth Baroque Opera Festival.

Frank has been using Astera products for around 6 years. “They are extremely good fixtures and great for these scenic applications,” he stated, adding that he also loves all the bracketry and mounting kit that comes supplied with the Titan Tubes.

To illuminate the magnificent front of the Margravial Opera House for the Allessandro Nell’Indie performances which featured music by the {oh!}Orkiestra from Poland, conducted by lead violinist, Martyna Pashuszka, Kai deployed 16 x Astera AX5 TriplePARs which were also ideal for highlighting its ornate facade.

Opened in 1748 and declared a UNESCO World Heritage site in 2012, the venue reopened in 2018 after extensive renovations restoring it to its original Baroque opulence simultaneously updating the backstage facilities to accommodate modern productions. It is also a museum.